If you’ve ever spent any time on YouTube watching smoked and bbq meat videos, you’ve probably come across the Guga Foods channel and heard about his famous Guga Rub. The channel is full of great videos and food experiments that everyday backyard Pitmasters would never dream of trying. Like Dry Aged Nutella…. Yup, he really did it.

The best thing to use the Guga Rub on is steak, however, we’ve seen him use it on many different cuts. If you’re making steak and want to take it to the next level, try Gugs’s Butter of the Gods. It is an amazing steak topper that you’ll want again and again.

Try Guga’s Rub with these recipes

How to make the Guga Rub

Guga Foods BBQ Rub is so easy to make, just mix the ingredients below and you’re done! Spread Guga Foods BBQ Rub on your Smoked Pork Chops, Smoked Salmon or even just some plain old Smoked Chicken Breasts. Whatever protein you decide to use, this run will give you a nice flavor. 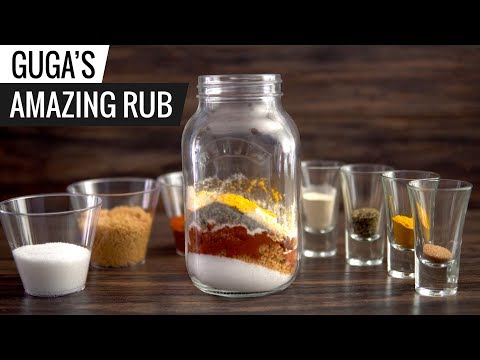 BBQ Hero Tip: Use an air tight container for this rub and it will last 2-3 weeks in your pantry.

Where is Guga from Guga foods from?

Guga is from Brazil! Goga grew up in a small town in Brazil that was known for having incredibly good and expensive beef. Guga loves beef (especially picanha) and you can watch a lot of the different ways that he BBQ’s his beef on his YouTube channel.

Who is Guga from Guga foods?

Guga’s real name is Gustavo Tosta. Guga, was born in Brazil but lives in the United States and runs a few YouTube channels where he shares his recipes in a fun and entertaining way.

Is Guga a chef?

What knife does Guga foods use?

Guga Foods seems to always be experimenting and trying new things! We’ve tried many of his recipes (the not-so-crazy ones) and they have turned out amazing!

If you’re just getting into smoking meat, check out a few of these helpful guides:

If you’re just getting into smoking meat and haven’t quite decided what kind of smoker you want to buy, take a look at some of our helpful buyer’s guides:

All BBQ enthusiasts cook ribs. It’s one of the staples. But finding a … Pork…

Husband, Dad of Girls & Weekend Pitmaster. BBQ Hero has become an amazing passion of mine. Follow @bbqherocom for my latest meals & tips!

BBQ has been part of my family for years. I'm a Dad of 3 girls & married to the love of my life. I built BBQ Hero to help share our passion for BBQ with anyone who wants to share BBQ with their family! Learn more →